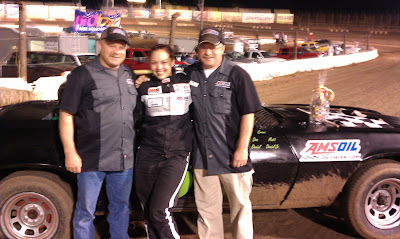 For immediate release.
(Perris, CA, April 16, 2011) What a difference a year makes for PASSCAR Factory Stock Driver Stephanie Herbage. Last April in her rookie season, she was involved in a wreck that totaled her car. She raced the remainder of the year in a borrowed car. This year, she starts her season with a new ride and an impressive win.
It was a real emotional event for the driver and crew. They worked so hard on the new race car to get it ready. They struggled in hot laps and failed to make the heat race with fuel delivery problems. It looked like she wouldn’t make the main event. Once the problem was corrected, Herbage was able to start the main event on the front due to the inversion. She lead every lap and held off the field including Keith Woods, who was all over her bumper for the final laps of the race.
Congratulations to Stephanie, her crew; Dan, Matt, Daniel, Jason, Ken, and Daniel Jr. and her sponsors; K&N Filters, Swedish Speed, Champion Towing and Oil Twins / AMSOIL.