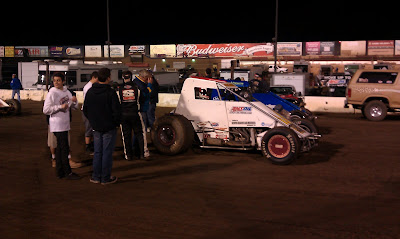 (Montclair, CA, April 3, 2011) Lots of excitement was generated by the Oil Twins/AMSOIL sponsored racers in both USAC Sprints and California Lighting Sprints on Saturday night.

In USAC Sprints, there was a record number of five cars flying the Oil Twins banner; Greg Alexander - #23, Bobby Bender - #11b, Gary Potter - #62jr, Jerry Welton - #62 and Randy Waitman - #69. Randy Waitman ran a strong heat race and lead eight laps, unfortunately he was stung by too many cautions and gave up the lead on a restart. Greg Alexander really showed his stuff and won his heat, beating the points leader and three time champion Mike Spencer. This was the first heat race win for an Oil Twins sponsored USAC Sprint driver. In speaking to Greg after the race, he said, “The car was working very well tonight. The Amsoil products have made a noticeable difference. Our oil pressures are more constant throughout the RPM range.”

The CLS was equally exciting. There were two racers representing the Oil Twins, Tim Brown - #22 and John Sparlund - #7. This was John’s first race in his return to CLS. He had his hands full with teething a brand new race car. Tim Brown did a marvelous job winning his heat and taking a second place in the main event.

The Oil Twins would like to thank all of our racers and especially CLS racer Zach Zauss who is recovering from surgery and could not make the race this weekend.

The Oil Twins will return to PAS April 16th for the opener of PASSCAR. This will be the debut of the Oil Twin's Dominator Award.

See you at the PAS!