Oil Twins racer Casey Jones was featured on CBS 10 in San Diego to promote the H1 Unlimited race at Bayfair. The segment kicked off the festivities with a featured shot of Miss Amsoil.

"It was an unexpected surprise when I answered a knock on the trailer door this morning to find an official asking for a driver for the morning news", said Casey with a grin. "Being at Bayfair is all about the fans and what better way to connect with them then TV".

Casey is racing in the A Stock Hydro class. Come on out and say hi. 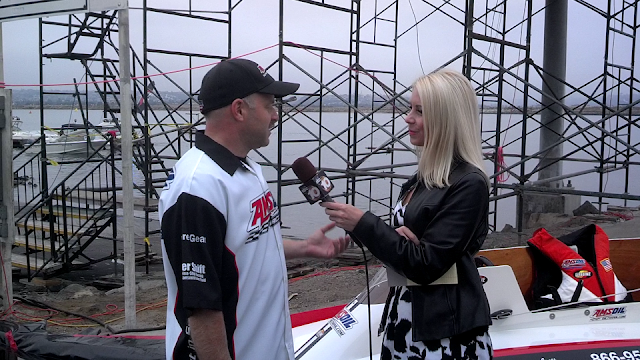 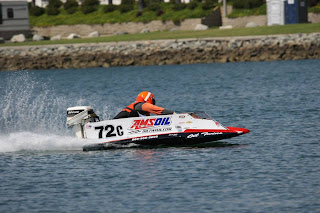 (September 11, 2013, Montclair, CA)  The famous Amsoil Oil Twins of Montclair, California, are set for a great weekend of boat racing at the APBA sanctioned San Diego Bayfair on Mission Bay starting on Friday.  Casey Jones will be driving “Miss AMSOIL”, an APBA A Stock Hydroplane (ASH).

Jones took his maiden boat racing voyage last month at Long Beach Marine Stadium.  He and his team will trek to San Diego Thursday afternoon and will take to the water first thing Friday morning.

“Our first race is Heat #1 & Final AX Hydroplane Friday at 8:30 AM,” the rookie driver said.  “We are going to race two different classes for the three days.  The ASH (A Stock Hydro) class and the AXH class which is more of a Junior Class with a restrictor plate.  Each day there will be a first and a final heat per class.  There are eight boats coming that we know of in the A Stock Hydro and probably about four boats in the AX class.”

Jones and crew chief Andy Jones have worked hard at resolving the glitches they encountered during their initial outing at Long Beach.  They have labored countless hours on the attractive boat and have had it out for a test run where it performed flawlessly.

“We know there were some electrical issues and also some fuel delivery concerns,” Jones lamented.  “We went through the motor on the fuel side and the ignition side and didn’t have an issue with these things when we went out and tested over Labor Day Weekend.  We were dialing in the set up and we were making sure the reliability is there.”

Jones main focus for San Diego is getting in laps and finishing races.  When he did so at Long Beach he did well including a second place heat race finish.  “My goal is not to be towed back in and I think we are going to accomplish that,” he confidently stated.

In addition to his own racing, Jones is excited about the prospects of all of the other Oil Twins sponsored boats that will be in competition.

“Doing a quick count, there will actually be five boats out there that are part of the Amsoil/Oil Twins family,” Jones stated.  “I would be pleased if they swept the podium (ASH Class) this weekend.  With five of the eight showing up being Oil Twins sponsored, that is quite possible.  That is what my bigger goal is.”

Jones wants to thank all of those who make his racing endeavor possible.

Be a part of Miss AMSOIL and Oil Twins Racing. To promote your product or business and be exposed to tens of thousands of potential customers at race events, car shows, and expositions, please contact Casey Jones at 909-821-5551 or mailto:casey.jones@oiltwins.com. Sponsorship packages are available at all levels.