Perris, California – As the PASSCAR season was coming to an end, the AMSOIL / Oil Twins racers were just getting it started. Drivers Tim Pyle in the Factory Stock class and Angel Figueroa in the CDCRA dwarf car series both podiumed. 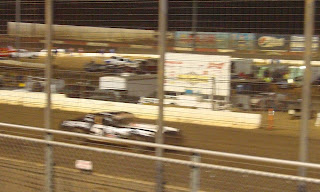 Tim Pyle in the AMSOIL / Guaranteed Healthcare Insurance number 5 Camaro drove the hardest race of the year. He managed to pull off a second place finish after being involved in a wreck on lap 5 and starting at the back. 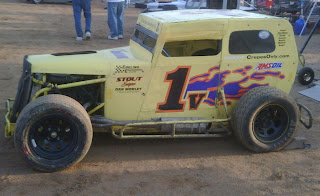 Angel Figueroa in the Auction Auto Prep / AMSOIL number 1 dwarf car finished second in his heat which gave him a decent starting position towards the front. He soon found himself out front and never looked back. He finished the season with another first place finish.


Racing resumes in February 2010 at Perris Auto Speedway. For information about the “PAS”, visit http://www.perrisautospeedway.com/ or call 951-940-0134. To purchase AMSOIL products, visit: http://www.oiltwins.com/
Posted by AMSOIL - "Oil Twins" at 8:02 PM No comments: 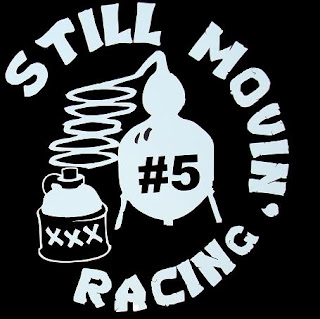 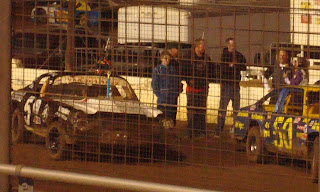 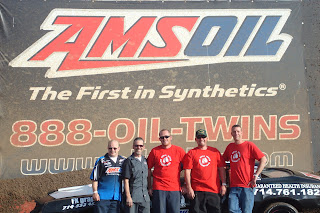 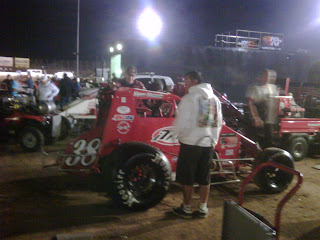 Montclair, CA (November 6, 2009)- USAC Sprint Car racers from all across the country converge on Perris, California to compete in the USAC Nationals. The racing at this half-mile track is always exciting and the drivers put on a great show for the fans last night. The ITI Motorsports #38 made up a lot of positions and was able to improve his finish.

With two more races remaining for the weekend, the action is going to heat up. 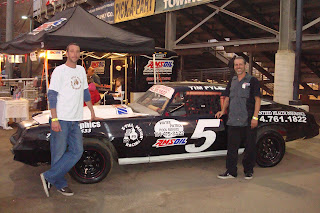 In the midway, the AMSOIL booth featured the #5 Still Movin’ Motorsports Factory Stock Car with driver Tim Pyle and crew member George Wolfe present and answering questions. “With AMSOIL in the motor, transmission and differential, we are now running up front and are on the verge of a win at the season finale in November.”, said Pyle when asked about how the products are working for them. Come on out and stop by the AMSOIL booth!

For the latest information on the ITI Motorsports #38 visit: http://itimotorsports.com/
Posted by AMSOIL - "Oil Twins" at 8:44 AM No comments: 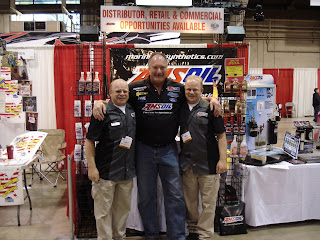 http://oiltwins.com/
The “Oil Twins” have a special offer to our bloggers. Come out to this weekend’s Off-Road Expo and visit the AMSOIL – Oil Twins in building 4. Ask to speak to Andy or Casey directly and let us know you are one of our bloggers. We will then give you the details of the special offer.

Due to policy, this offer can not be advertised, so come see us personally.

AMSOIL INC. has been dedicated to helping reduce negative impacts on the environment. AMSOIL was the first to recommend 25,000-mile/one-year drain intervals. By safely extending drain intervals, AMSOIL synthetic lubricants dramatically cut the amount of oil consumed and emissions produced. In addition to the extended drain intervals, AMSOIL synthetic motor oils are specially designed to protect engine components, extending the life of the engine and reducing the need for replacing engine parts. They are also thermally stable with a strong resistance to high temperature volatility (burn-off), preventing sludge deposits and keeping engines clean. Low volatility and clean operation reduce oil consumption and emissions.

The advanced lubricity (slipperiness) of AMSOIL synthetic lubricants has also been proven to increase fuel economy. This reduces fuel consumption.

For more information on AMSOIL call 888-OIL-TWINs or visit www.oiltwins.com or their display in booth 408 in the tent.
Posted by AMSOIL - "Oil Twins" at 9:54 AM No comments:

Come see the "Oil Twins" out at the RVIA Show at the Fairplex.

Do you know about DOLLAR DAYS at the 57th Annual California RV Show? Admission is only $1 Monday through Thursday October 19th-22nd. No coupon needed. Bring your friends and family. The show is open 10am to 6pm daily. Come on over to Fairplex in Pomona and have a fun day looking at all the new 2010 trailers and motorhomes, plus you don't want to miss the incredible deals on a few remaining 2009 models.

For our friends who attend the show Friday through Sunday, you can save money with $2 off discount coupons available on our web site at www.CARVShow.com.

We use our RV to take our grand daughter, Emma, camping in Big Bear. It’s been a great way for her to spend quality time with us and there are plenty of things to do together. Her childhood memories of campfires, watching for bears on the trail and fishing with Grandpa are forever. That’s one of the best things about an RV – they allow families and friends to have fun and create special memories.

See you at the Fairplex October 16th-25th!
Marsha McInnis
Western Show Director
Posted by AMSOIL - "Oil Twins" at 5:24 AM No comments:

Montclair, Ca - The "Oil Twins" Casey and Andy Jones will be out at the TRAXXAS TORC Series Presented by AMSOIL this weekend held at the Perris Auto Speedway. They will be working the AMSOIL booth and providing technical assistance to racers in the pits.

"We enjoy being in the pits helping teams solve lubricant related failures.”, said Casey Jones one of the “Oil Twins”. “More often or not racers just accept failures and do not consider the role their lubricant may have played in the breakdown. One of the most common breakdown is the rear differential.”

To address this, AMSOIL has a proprietary extreme pressure additive which forms an iron-sulfide barrier coating on gear surfaces for the ultimate line of defense against wear, pitting and scoring. I can not tell you how many times I have heard racers running the Sever Gear ® 250 with success regardless of the oil sponsor on the hood.”

The “Oil Twins” will be available this weekend to help solve problems. To make an appointment to have the “Oil Twins” assist your team and get you into the winner’s circle, call 888-OIL-TWINs or visit www.oiltwins.com
Posted by AMSOIL - "Oil Twins" at 8:26 PM No comments: