GREG ALEXANDER GETS A WEEK OFF - AMSOIL NOW SPONSORS THE #72 CAR! 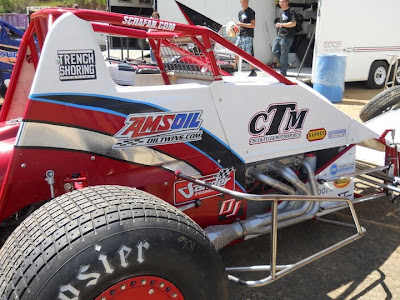 ALEXANDER GETS A WEEK OFF - AMSOIL NOW ON THE #72 CAR!

Last Saturday night, the Gardena, California resident was in Tulare for the Faria Memorial, which was round three of the 2011 USAC Western 360 Series. Coming in second in the championship points standings, Alexander was 12th fast qualifier in the 23 car field. The driver, who celebrated his 22nd birthday this past Tuesday, finished second in his heat race and started 10th in the A main event.

By midway in the main, Alexander had raced his way up to sixth place before banging wheels with another car. He went wide into the slick stuff on the outside and the car stalled. He restarted at the back and was 16th when the final checkered flag fell on the night. Heading into next week's race he is fifth in the USAC Western 360 points standings.

In March, Alexander added Amsoil as a sponsor to his John Bellegante owned ride in the Amsoil USAC/CRA 410 Sprint Car Series. Alexander is impressed with the performance of the product. Likewise, Andy & Casey Jones of the Oil Twins are impressed with Alexander's driving and with his professional approach to the sport. So impressed, they are now a sponsor of Alexander in the Chuck Taylor Motorsports #72.

"This gave us another chance to sponsor Greg and to sponsor a car that is capable of winning the USAC Western 360 championship," Andy Jones said via telephone. "Greg is a great guy and very professional. We are pleased to now sponsor him in both his CRA and USAC Western 360 racing efforts and he will be using Amsoil in both cars."

In addition to his Chuck Tyler Motorsports ride in the USAC Western 360 Series, Alexander also drives the John Bellegante owned #23 in the Amsoil USAC/CRA Series. That car is sponsored by Barnes Systems, Amsoil, Persall Masonry, and Scott's Headers and Mufflers.

If you would like to be a part of Greg Alexander's racing efforts in 2011, please use the contact information at the top of this release.