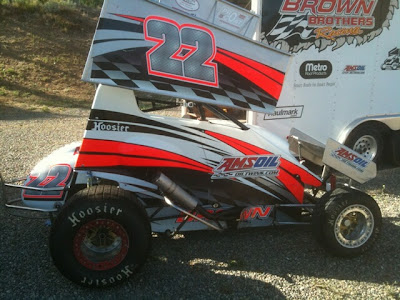 A long time amateur motocross racer, Brown, 51, was also a big Sprint Car fan. Four years ago he went to a Lightning Sprint Car race at Barona. "It is a funny thing," he said with a laugh over the phone on Wednesday afternoon. "I watched it and I said, 'I can go out and win this.' So, I went out and bought a car. I never practiced in it, I just went and raced and found out it was not as easy as it looked."

Brown always liked going fast and was fully prepared to do so the first time he sat in the car, but he did not realize how much more was involved in the set up of the car as opposed to a motorcycle. While he is still learning set ups to this day, he has had a phenomenal start to the 2011 season and is leading the CLS points heading into Saturday's race. In the first five races of the campaign he has three second place finishes, a fourth and a ninth. He leads the second place driver by 36-points as they prepare to attack the brightly lit PAS half-mile clay oval.

Brown met Andy Jones of the Oil Twins through 2009 CLS champion Stuart Hielscher. Jones offered Brown a CLS Amsoil sponsorship. At the time Brown was using a different brand. "At that time I was changing my oil every race," Brown emphatically said. "The guys I bought my car from said the best thing you can do is change your oil every race. So that is what I was doing. Andy told me his product was better than what I was using and I would not have to change the oil so often so I bought a case."

When Brown purchased his first case of Amsoil, Jones told him instead of changing it every race, go three races before changing. "With the old brand, when I would change oil after every race, it would almost look like it separated," Brown said. "It had a strange look to it. It appeared whipped and had a swirled look to it. When I ran the Amsoil, I took Andy's advice and ran it three races. It is a real gold looking oil. When it came out after those three races, it looked like it had not even been used. It was still the same exact consistency and was as gold and clean as it was the day it went in. That was after three nights of running the thing at 13,000 RPM's for 45 minutes."

Brown was amazed by the product and told that to Jones. He was pleased with Amsoil and the Oil Twins were happy with him. They decided they would offer him additional support for the season to fight for the championship. In addition to their lubricants, Brown uses the Amsoil Coolant Boost and Heavy Duty Metal Protector on his chain.

Crowning of the 2011 California Lightning Sprint Car Series champion is still a little over five-months away. However, with his current point lead, consistent driving style and Amsoil in and on the car, Tim Brown would is a good bet to be the man on top of the heap when the final checkered flag falls.

Highlights of the Saturday's race will be available from Raceway Video. http://racewayvideo.com/

In addition to Brown and the California Lightning Sprint Cars, the Amsoil USAC/CRA Sprint Cars, Senior Sprint and the WRA Vintage Cars will all be in action on Saturday night. Spectator gates will open at 5:00 PM and the first race will be at 7:00. For more information, please visit the track's web site at: http://www.perrisautospeedway.com/


This piece was produced by Scott Daloisio Sports: (909) 226-7768, mailto:sdaloisiosports@aol.com or http://twitter.com/ - !/search/sprintcarpr. Be sure to keep an eye out for news on our other racing clients. Perris Auto Speedway, David Cardey Racing, California Lightning Sprint Car Series, Greg Alexander Racing and Justin Marvel in the RB Motorsports #1B.