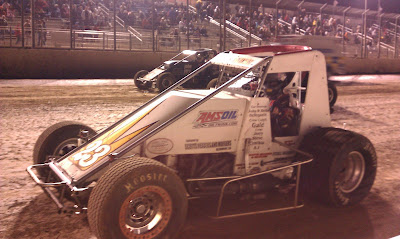 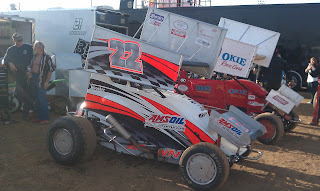 Before the largest PAS crowd of 2011, Alexander, 22, was competing in the Amsoil USAC/CRA Series. Going up against the best funded teams on the West Coast, the Gardena, California based racer turned in the eighth fastest qualifying time in the tough 33-car field. In three starts in the series this year, Alexander has one fast time, a fifth and Saturday's eighth.

In heat race action, Alexander posted his second win of 2011. He then began the main on the outside of the front row and jumped into second on the start. As usual, Alexander awed the crowd as he battled tooth and nail with the big buck teams. On lap six, he took the lead and ended up leading his first two laps ever in 410 Sprint Car competition.

A couple laps later Alexander did spin while fighting for second and he was forced to restart at the back of the field. After the restart, he passed several cars and was headed for the front again when a red flag came out due to another car crashing. Once the race restarted again, Alexander's right rear was losing air pressure and he was forced to drop out and finished 19th. It was another impressive night, but this one had a disappointing finish for the up and coming driver.

Brown, who lives in Wildomar, California, was competing against the California Lightning Sprint Car Series largest field of cars (23) in 2011. He was impressive from his first green flag of the night when he came from the second row to win his six lap heat race.

For the main Brown had to come from the tenth starting position (outside row 5) and he immediately began making a charge to the front. By the end of the fifth circuit he was third and when the 20-lap race reached the midway point, he was running second.

Things got exciting on the 11th lap when Brown made contact with another car. The front of his brightly painted Oil Twins Amsoil sponsored racer got up in the air. When it came down, he was speeding head on towards the inside crash wall. In an incredible move, he managed to get the car turned, brushed the wall and continued racing! It was a miraculous save, but he did drop back to fifth. Once he had gathered it back in, he got busy with the job at hand and advanced to the fourth place spot, which is where he was when the checkered signaled an end to the exciting race.

Had Brown not gotten the car straightened and hit the wall hard on the lap 11 incident, he would have lost his point lead. However, his great save and persistence to gain back another position before the end of the race allowed him to increase his point lead from 36 to 49 points.

In the six CLS races to date thus far in 2011, Brown has three second place finishes, two fourths and a ninth. He has been the most consistent driver of the season and therefore sits on top of the championship points standings.

While Brown has this weekend off, Alexander will be in action this Saturday in the Chuck Tyler Motorsports #72 at the Ron Otto Memorial USAC West Coast 360 race at Santa Maria Speedway. Brown will get back into the Oil Twins Amsoil #22 on Saturday, June 11th, when the CLS Series makes it's first ever appearance at Victorville Raceway Park.

This piece was produced by Scott Daloisio Sports: (909) 226-7768, mailto:sdaloisiosports@aol.com or http://twitter.com/ - !/search/sprintcarpr. Be sure to keep an eye out for news on our other racing clients. Perris Auto Speedway, David Cardey Racing, California Lightning Sprint Car Series, Greg Alexander Racing and Justin Marvel in the RB Motorsports #1B.
Posted by AMSOIL - "Oil Twins" at 7:00 PM